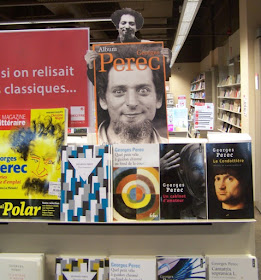 I was not going to write my usual praise of French bookstores, or, really, my lament about American bookstores, not this time, but near the end of my trip to France I was driven into embarrassment, as we can see on the left.

What we see here is part of the display of the works of Georges Perec, as found in the Decitre bookstore in Lyon – not the giant Decitre but the one at the mall.  The occasion is the release of the Pléiade edition of the works of Perec in two gigantic volumes, a stamp of Official High Status.

Lyon is a big city, but I found similar displays in the windows of two bookstores in Vichy, a town of 25,000, although a spa town that gets thousands of visitors.  But visitors who want to buy expensive editions of fifty-year-old avant-garde novels?  Yes, to some degree, apparently.

The great touch is the cardboard Perec holding a gigantic copy of his Pléiade “album,” or I guess really a tiny cardboard Perec holding a regular sized “album.”  A publisher designed, printed, and sent around this special display.  A bookstore employee punched it out and assembled it.  I saw it in the windows of many bookstores.  There were also posters.  I am trying to compare the marketing effort to that which will accompany, say, the Library of America editions of Don DeLillo, who was born in the same year as Perec.  Heck, the Philip Roth books did not get this kind of promotion.  Again, I remind myself, this particular photo is from the bookstore at the shopping mall.

French bookstores are legally protected in a number of ways, but this is really a difference of culture.  The ban on price discounting does not cause bookstores to give so much space to an author like Perec.  Does it actually sell books? 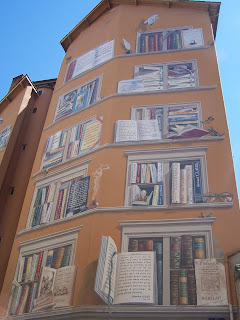 We, in the United States, do not treat our artists as well as we should.  Not that little cardboard figures are such good treatment in and of themselves.  Still.  To the right is one of Lyon’s many building-sized murals, this one devoted to writers and books and Lyon's history as a center of early modern publishing.  It’s culture, culture, culture.

Disclosure: I have never read a book by Perec.  It is the principle of the thing that galls.